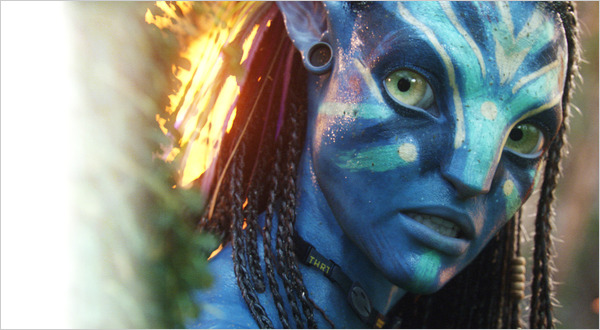 Let’s get the negatives out of the way first. The movie pits good against evil in a tired old storyline that has less subtlety than a spaghetti western. The postcolonial spin on the tale is that here the indigenous people are so exotic and pure they can make you cringe—especially their religious rituals, which are about as complex as “Kumbayah.”

But I forgive these foibles for what the movie does so well. It’s simply beautiful. Breathtaking. Stunning. Especially if you see it in 3-D. (Don’t even consider anything else.) The natural world of the movie is a cornucopia of delights painted in lush greens, pinks, blues, and golds. Someone—lots of someones—had fun designing it. I loved the magical effects dancing in 3-D just over the heads of the people in front of me. I adored leaping through the forest and flying through the air on the backs of winged creatures—movement as joyous for viewers as for the paraplegic main character.  The buzz is that Cameron’s technical creativity will change movie making forever.

And I have to hand him this too: like it or not, the movie tells a true and all-too-familiar story—of one people seizing and destroying the homeland of another for the sake of natural resources. In the film this precious commodity is “unobtainium” (love the joke). Think land, water, gold, uranium, oil—all this in the last 160 years of American history alone. I can put up with a little moralizing—almost unavoidable with a dualistic premise—when the tale that’s told is true.

But I’m most interested in the buzz about the spirituality of the movie. Conservatives have been quick to denounce its nature religion. Peter Suderman led the charge last week with complaints about “quasi-mystical eco-nonsense.” He’s bothered by the indigenous “purveyors of cheap mysticism and nature worship.” Ross Douthat of the Times followed suit with a post dismissing pantheism as an inferior response to what he calls the tragedy of the world: the “cruel rhythms” of nature, where life is “nasty, brutish, and short.”

Caleb Stegall at Front Porch Republic countered with some reasons for admiring the culture of the Na’vi, the indigenous people of the movie. He focused on the values of community: a sense of belonging, being part of a people and a place. Only those who are attached to place can become dispossessed, and he finds a collective dispossession happening now; “people know intuitively that they are losing something invaluable.” The Dispossessed-R-Us—where “us” has come to include people of the mainstream culture, no longer only those pushed to the margins. “Powerful outside forces” now threaten everyone’s connection to land, food, and culture.

If viewers identify with the Na’vi, I think it’s just as likely that we recognize ourselves as their nemeses—maybe not the cardboard military commander, but what about the corporate workers who were just doing their jobs? White people know full well which side of the Indian wars we fought on. And those of us in the developed world know what our energy-guzzling ways are costing people elsewhere. We don’t want to think that forests are being leveled or coastal people forced from their homes for our sakes. Displacers-R-Us too. Now that’s a scary story.

Yet the discomfort of the critics is not about this. Douthat says it most clearly. Pantheism, or finding God in the material world, appeals to modern people leery of miracles, anyone “who recoils at the idea of a demanding Almighty who interferes in human affairs.” God rightly sits outside the natural world, in other words, directing the show from offstage. Pantheism sacrifices too much of the monotheistic God. Douthat, drawing on a Polish philosopher, does try to understand its appeal: “Attributing divinity to the natural world helps ‘bring God closer to human experience,’ while ‘depriving him of personal traits.'”

Douthat sounds here less like the Catholic he is and more like an iconoclastic Protestant, ready to banish God from the world except for a few preapproved events. Roman Catholics, with more than a thousand years of robust natural theology, have always found it easier to contact God in matter, starting with bread and wine. Hyperseparation between God and the world has never sat comfortably in Catholicism.

And if Douthat thinks pantheism is about reducing the amount of personality in the divine, he is seriously mistaken. It’s a misreading of both the movie and the cultures that (loosely) inspired Cameron’s vision, such as those of indigenous North America. Rather than a less personal version of reality, the nature religion of the movie is shot through with personality. Every animal is a companion, friendly or not. Plants and insects respond lavishly to humanoid presence. The Na’vi world is a web of connections, a world of response-ability. “The universe is personal,” wrote theologian Vine Deloria Jr. of the Standing Rock nation, “and, therefore, must be approached in a personal manner.”

This is what modern people, impoverished by a mechanistic view of nature, now crave. A world of relationships.

I celebrate this movie about relationships. About connecting with the very personal natural world. (Those of you who have seen the movie know how literally those connections are made.)

Connections to nature, to the earth—this is the real dispossession that has occurred in the last few hundred years. The human separation from nature is what pantheist and animist traditions throughout the world have tried to heal. It’s why nature religion is the fastest-growing religious impulse in the world today.

Thanks to Chas Clifton for starting my train of thought on the movie.