A story in today’s San Francisco Chronicle pasted a huge smile on my face. It’s about the Butters Canyon Conservancy in Oakland, California, which recently passed a significant milestone—sealing the deal on the last for-sale property along a green stretch of urban creek. The story juices me because Butters Canyon was my home for some years, and I founded this land trust in 2001. I never set out to work in land conservation. It’s just that I got radicalized by a little urban creek flowing far below my kitchen window.

My partner and I bought the hillside house during the rainy El Niño winter of 1997–98, and Peralta Creek was a roaring presence outside the house during the first months we lived there. For years I walked this stretch of Butters Drive with my dog, Sapphire, soaking in the peace of spreading bay trees and the seasonal trickle of water nestled in a crevice of tangled green.

But in 1998 when I moved in, the base of the canyon was a mess. Peering over the edge of the street, you could see a mattress or two, some tires lodged in the dirt, and more pieces of old machinery than you could count. So with the help of the city’s hauling service, the neighbors and I organized a creek cleanup. I’d never been part of one and had no idea if people were interested in stumbling up and down fifty feet of steep, poison oak–strewn canyon hillside to haul trash out of a creekbed.

But that foggy September morning, around fifty people showed up, and over the course of the day we wrested out stoves, bed springs, enough rusty furnishings to fill an apartment. The ones who stuck around for pizza and sunshine gathered for a group photo that afternoon. That’s me in the red shirt holding my small next-door neighbor: 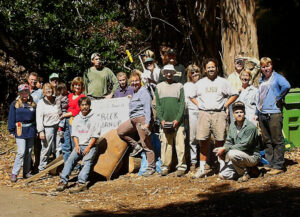 The following spring, when a parcel in the canyon came up for sale, the logical next step was a land trust. Not that I knew anything about land trusts or had ever worked in real estate. But there are books and people to ask for advice, and with their help I filed the papers and called a few people together as a board. We wrote up our strategic plan, started fund-raising . . . and a decade later the land trust completes this stage of its mission.

I moved out of the neighborhood long ago so have not been part of the workings of the land trust for most of its life. But I took this lesson with me: Never underestimate the power of a creek to change your thinking, and your life.