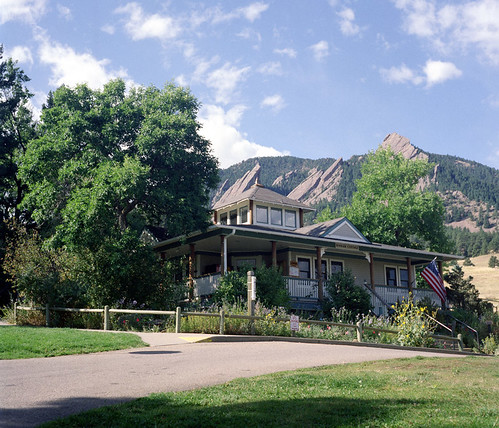 I’m volunteering again this spring at the native plant garden at Chautauqua Park. In front of the ranger cottage at the trailhead to Chautauqua Meadow, the garden provides a rich, blooming snapshot of the wildflowers found throughout the park. For those of you out of town, the park is no more than a mile from downtown Boulder, sandwiched between houses on one side and the Flatirons on the other. This photo shows our terrible working conditions. I mean, the scenery we have to put up with there in the garden!

Most years at the beginning of June, the golden banner (Thermopsis montana) is running riot all over the garden and the park meadow. Big clumps of it. Seas of yellow. This year it is a bit more subdued. Here we are looking left from the steps of the ranger cottage. The banner is blooming, but not so profusely: Golden banner is a legume in the pea family, which you can see from this close-up of that flower in the foreground: Our crew leader, the naturalist extraordinaire Dave Sutherland, likes to say that nature deals a different hand of cards each year. Some years the combo of wind, rain, and sun favors one set of flowers, other years another. This year we had a dry March, a cool April, and then weeks of rain in May. The golden banner was a little less happy with this arrangement.

But if the banner lost out, the big winner this spring is wild irises (Iris missouriensis). Here is a close-up of that clump at the back of the garden: During most springs, the irises are found only in wet places—low-lying marshes, drainages, washes. But this spring the irises are everywhere, places I’ve never seen them before. They soaked up those May rains and are now partying like there’s no tomorrow.

We discovered this when, as a group, the volunteers and Dave took off early and headed up the trail for a hike. The irises were strewn throughout the meadow: We also saw some sand lilies (Leucocrinum montanum), an early bloomer that usually disappears by June but is hanging around because until a few days ago the temperature remained cool: And bunches of lance-leaved chiming bells (Mertensia lanceolata), also winding down now as the weather warms. I learned from Dave that the chiming bell is like an iceberg: the vast bulk of it is below ground in a thick tuberous root. So when wildfire scorches the surface of the ground, chiming bells shrug their proverbial shoulders and prepare to bloom again: Turning down the Bluestem Trail, we began to pass the ponderosas. I can’t resist ponderosa bark up close. Press your nose to a crack in ponderosa bark, and enjoy a whiff of butterscotch. We also saw a few blue mist penstemon (Penstemon virens), usually so common in June. Like golden banner, the penstemon were not so happy about the hand they got dealt this spring. You’ll find them here and there, but nothing like the clouds of blue that normally sweep across the woodland ground: It was straight-up noon, time to head home to work on my book. Back at the trailhead next to the garden, I couldn’t resist yet another iconic picture of the Boulder Flatirons. I love where I live!