Note from Priscilla: This is my first post from the Rio Earth Summit, where I’m a guest of tcktcktck.org after winning their blogging contest earlier this spring.

“The people are having their say,” Jamie Henn, communications director for 350.org, announced jubilantly on a panel at Rio+20. The results of the Twitterstorm he’d helped organize were rolling in—and they were overwhelming. The hashtag #EndFossilFuelSubsidies peaked several times during the day, at one point breaking out as the second-most-used hashtag in the whole Twitterverse. It trended again late in the day even as I was writing: 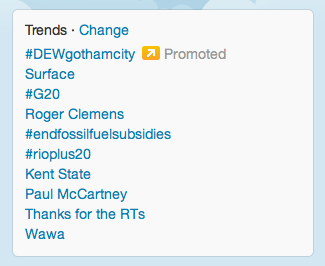 350.org along with Avaaz, Greenpeace, and other climate groups organized the Twitterstorm to let world leaders know that the people heartily support a proposal that’s been on the table for years but only halfheartedly endorsed by a few governments and never acted upon at all.

What difference do the subsidies make?

At least $775 billion dollars’ worth—and that’s only the subsidies that can be tracked. Additional hundreds of billions of dollars are hidden “underground,” such as in the military costs of securing the routes by which oil flows.

What could the world do with $775 billion? Eradicate global hunger every year for 25 years, for starters. (The FAO—Food and Agriculture Organization of the UN—estimates it would cost $30 billion per year for this job.)

Or how about investing in renewable energy? Jake Schmidt of NRDC (Natural Resources Defense Council), the go-to guy for all things related to climate policy, said on the panel that the $775 billion represents 12 times the amount of money invested in clean energy. “At a time when renewable energy sources are getting close to economic parity in many locations around the world, it is insane that we should be pouring these subsidies in fossil fuel,” he said.

In effect, clean energy is getting penalized twice, he said, once because the fossil fuel industry doesn’t pay for the damage it does climate, health, and the environment, and on top of that it gets a government handout. And all this in a time of high unemployment, even though clean energy is a much better job producer. “One dollar invested in oil creates ¼ of the jobs of $1 invested in clean energy.”

Ian Keith of Avaaz.org added, “Climate change is an overwhelming concern around world.” But in spite of people’s sense of urgency, governments keep handing billions “to the richest companies in the world.” Exxon last year, he said, made $5 million every hour. That’s $1300 in profits every second. “We cannot have sustainable development when we are paying these companies nearly $1 trillion per year.”

Steve Kretzmann, founder of Oil Change International, offered this FAC sheet on the enormous sums we’re talking about. “The important thing to remember,” he said, “is that these numbers are likely all conservative. The real amounts are likely far higher.”

Given that a huge chunk of the subsidies, $630 billion out of $775 billion, goes to consumption subsidies in developing countries, how can you justify cutting off all this aid to poor people? Srinivas Krishnaswamy, of the Vasudha Foundation in India, explained that their studies of subsidies in India show that the aid never actually reaches poor people at all. It goes to subsidize the use of gas, which bypasses poor people because they are not the ones owning and driving cars. “What we need instead are subsidies for energy, so that everyone has equal access to energy—for cooking and heating as well as for transportation.”

Some high-profile figures joined in the tweeting, including this from Nancy Pelosi:

But the best tweet of the day came from the Australian Youth Climate Coalition:

What can you do?

Check out this list of tools from Oil Change International: tell a friend, talk to your family members, demand an oil change from your elected officials.

Follow the money here to see how much your representatives have accepted in donations from the fossil fuel industry.