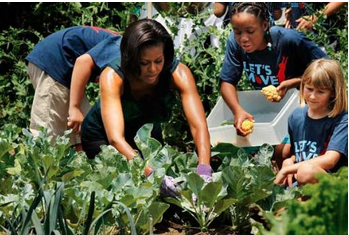 Okay, they called a garden, but let’s not quibble. Like millions of women farmers around the world, the First Lady was breaking ground to grow food to feed her family and community. Unlike most of the world’s farmers, however, the First Lady has many social and economic advantages, and in her region of the world climate change has not yet robbed her of the water needed to grow food. Today, October 15, is Blog Action Day 2009 focused on climate change. It is also International Day of Rural Women. It’s a good day to look at what women, farming, and global warming have to do with one another.

First Lady Obama’s farm flourished over the summer, fed by abundant moisture. By July the White House farm had already yielded over 200 pounds of food. See the fast-motion plant growth beginning at 5:45 in this video:

By contrast, women farmers in equatorial regions of the world are watching their water sources dry up. In this video from GenderCC, Annabell Waititu of Kenya, an expert on gender, policy, and environment, lays out the problem succinctly (starting at :52): Because of climate change, the Mount Kenya snowcap has shrunk, and Kenyan rivers that depend on Mount Kenya for water and that used to flow year-round are now seasonal. Women walk farther to get water for crops, and animal herders move downhill to water sources. More conflict is taking place “because almost every conflict that you find in Kenya is about water resources.”

It’s well known that climate change affects poor people more adversely, but it is less often said that climate change affects women and men differently, insofar as they occupy different social positions and perform different roles. Women are 70% of the world’s poor, according to the UN Millennium Campaign, and the poor—especially poor women—tend to rely more directly on earth resources for sustaining daily life. Those who gather the wood, carry the water, and grow the crops, the majority of whom are women, suffer the most directly from climate change.

Discrimination against women also plays an enormous role in how women experience the effects of climate change. In India, for example, where women have seen their crop yields cut in half and the quality of grain diminish because of climate changes, women’s health is impaired from the double whammy of inferior crops and inequality. Sita Debi, a farmer in this next video (from Find Your Feet, a UK group working to end rural poverty) says,

When there is no rain, we women have to work really hard in the fields to try and grow crops. Our nutrition also suffers because we are the last to eat at the family table. A lot of us are anemic as a result.

Because of gender inequity, women, who grow the majority of food in much of the world, own only 1 to 15% of the world’s land. Women also have less access to information, such as disaster warnings, which means that as weather events increase in intensity due to climate change, women have less chance of moving to safe ground.

In spite of these inequities, women are taking leadership around the world in adapting to climate change. If you watched the above video, you heard a woman who heads an agricultural program in India observe that rural Indian women are already taking preventative measures against climate change:

Women here are incredibly resourceful. They are taking out loans from self-help groups to buy livestock so that they don’t have to depend on their crops. And groups of women often take out joint loans for irrigation equipment. . . . They also practice multicropping, so that if one crop is destroyed by bad weather, other crops will provide for their needs.

Although they are community leaders, women typically have less access to official decision making—at the local as well as the international level. Women’s perspectives are not yet heard equally with men’s in making climate change policy. From GenderCC (Women for Climate Justice):

Virtually absent and excluded from the negotiations are the people from the ground, whose lives are mostly affected—by the impacts of climate change itself, and by some of the solutions to mitigate climate change, too, that are decided without asking their opinions and consent. Even less represented are women, who eventually have to carry most of the burdens of the changing climate and the top-down decisions and remedies offered.

In other words, farmers too need to sit at the table—the policy-making table.

And here’s where the discussion comes back to this country—because gender discrimination is alive and well in the United States too and is having an effect on international climate change discussions.

The UN Convention to Eliminate All Forms of Discrimination Against Women (CEDAW) from 1979 is an international treaty for women’s rights. In the countries where it has been ratified, it has improved women’s lives—and thus the whole society—in many ways. Here is a small sample, according to Amnesty USA:

As of August 2009, 185 countries had ratified the treaty. Only 8 countries have failed to ratify it: Iran, Sudan, Somalia, Qatar, Nauru, Palau, Tonga, and the United States.

The Obama administration has placed CEDAW ratification high on its to-do list, but the government can only go as far as the American people go. Grassroots support is needed to get this important human rights treaty through the Senate.

The CEDAW committee of the UN is working hard right now to get women’s voices included in climate change talks. As the clock ticks toward December’s UN Framework Convention on Climate Change (UNFCCC) meeting in Copenhagen, the committee urges women’s participation:

Women are not just helpless victims of climate change—they are powerful agents of change and their leadership is critical. All stakeholders should ensure that climate change and disaster risk reduction measures are gender responsive, sensitive to indigenous knowledge systems and respect human rights.

Our First Lady, like millions of women around the world, is a farmer. She (with the help of a large staff) is growing food to feed a family and community. But she lives in a country that has not yet ratified a principal human rights treaty—one that will help ensure that women farmers around the globe share in the process of making decisions about climate change.

What you can do: