My New Year’s took an unexpected turn, shaped by two events—one intensely personal and the other happening halfway around the world. In Australia, the state of Queensland was slammed with floods affecting an area twice the size of California. Closer to home, my mother-in-law died peacefully during an afternoon nap, and I spent New Year’s Day at her funeral. Both events have me thinking about family—what they need in times of crisis, and especially how to extend that family care to the places where we live.

Let’s start with the human family. My partner’s mother was an elderly woman who had lived a good long life and whose heart wore out at the end. As the family gathered to say good-bye to her, we were supported by the community—in this case, a village of neighbors and churchpeople in rural Ohio. Photo by mypaleangel on photobucket

People there have lifelong relationships with one another. They’ve been through the death ritual many times together, and so each person knows the script. Coworkers dropped off plates of deli meat and vegetables for lunch. An enormous pot of homemade chicken noodle soup appeared for dinner. Relatives ordered flowers. The church’s hospitality committee cooked the after-funeral meal, including the highlight of the desserts: a dozen baked-from-scratch angel food cakes.

Who knew real angel food cake melts on your tongue?

Each gift appeared on time, delivered with heartfelt sympathy. Dozens of people shared the load of supporting the family. Because all knew the funeral script, all could play their parts with little fuss and bother (except the guy who baked all those cakes!). No one burned out caring for us because each person did only their share.

Yet altogether their help made an enormous difference. We felt buoyed up. What for many people is a lonely and jarring event—the death and funeral of a parent—was for us peaceful, personable, even joyful. Freed from preparing meals, we shared stories; we wrote eulogies; we laughed and cried together.

Cut now to Queensland and the flooding that resulted from torrential rains in December. I have a friend in Brisbane, Sylvie Shaw, who emailed me that Queensland was slowly being inundated by vast floods bringing major destruction of townships and land. People’s lives are lost, crops are devastated, animals both wild and domestic are destroyed, and the floods will have a massive impact on the local way of life. Likely the coral reefs will be harmed. She asks what can be learned from such a disaster:

It seems that all over the world there are the biggest ever kinds of disasters—fire, flood, cyclones, etc.—and yet the connections [with global climate change] are not being made.

While climate scientists continue to rack up evidence of the connections, they’re mostly ignored in the media. Climate Progress is one site publicizing the links between local weather disasters and global climate change (update: the site shut down in 2019). The meteorologists of the Australian government note that the torrential downpours were fueled by warmer than usual sea surface temperatures in the surrounding ocean. We can only think that these events will continue, and worsen, as ocean temperatures continue to rise with global warming.

People in industrialized countries are beginning to realize that we can no longer afford to think of ourselves as masters of nature; we need to cultivate relationships with nature as with family or kin. But Sylvie wonders how this changed mind-set can translate into action:

So even if we are aware we are kin, does this mean we care for the kin? Do we automatically care for the places where we live? 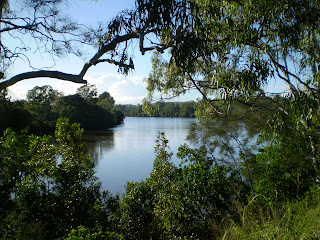 From Sylvie Shaw’s blog, River Stories and Sense of Place

Sylvie notes that Brisbane residents feel connected to the picturesque Brisbane River flowing through their city.

People say their identity is connected to the river, they love the river, and even have a spiritual connection with the river—but these feelings do not mean they know what to do about looking after the river.

You see where I’m going with this. The kind of care our family received from the community when a parent died is the kind of care every community needs to be setting up toward nature—toward the places where we live.

Because nature is hurting. Every place we live, no matter how beautiful, is in trouble. And it’s in trouble because of us. If we don’t change our ways—and fast—it’s curtains for life on Earth as we know it. Climate change is the family crisis of our time.

Yet we seem paralyzed at this moment, uncertain how to proceed. Are we waiting for the government to take action? For people we assume know more than we do to start things rolling?

I think we’re waiting for the script. We’ve never faced this kind of crisis. The 80 percent of Americans who live in urban areas often lack even the script for taking care of each other when crisis hits. All too often the onus is on each of us to look after our own care. How could we possibly take care of the Earth?

I used to be cautious about the idea of “caring for the Earth” because it can become just another way of setting ourselves up as lords and masters of nature. The time for such caution is past. The waters, the soil, the air all need our help. Desperately. Now. They have given all they can. It’s time to begin giving back.

What if we used the village model of caring as the script? Each of us does our part, so no one burns out. We choose our own contributions. Like driving less and flying less. Like eating local and supporting organic farmers and regional distribution systems. Or promoting energy efficiency in our home and our industry. Or installing solar panels. Or working to close the local coal-burning power plant. Or joining a nature restoration volunteer team. Each one doing something.

Like bringing in the soup. And especially the angel food cake.